The big 5-0. As my fiftieth birthday approached, there was a lot on my mind, mainly about time. Time – the new four-letter word that I didn’t particularly like given how fast the months seem to be passing each year.

The poetic words of Gord Downie – “No dress rehearsal, this is our life” reminded me that time is now. So, after a bit of research, Black Feather, a Canadian outdoor adventure company, offered a trip that would introduce me to the Arctic: a two-week expedition-style cross country ski across the Akshayuk Pass.

Footwear is the first thing I noticed standing in the Iqaluit airport, the gateway to the Arctic Islands perched like a winter toque on top of Canada. People wearing Sorels, Baffin, sealskin boots, this isn’t a dressy winter boot kind-of-place. Nor a street style casual Montreal jacket kind-of-place, coats made of down, seal skin or expedition grade materials were everywhere. Though, I think down is a great winter fashion piece. Even those travelling for business sporting jeans and casual dress shirts wore down or sealskin winter parkas. And the eclectic mix of people hanging about included photographers laden with cameras and awkward equipment, expedition types with ruddy skin and wrinkles caked around their eyes, local Inuit women and men heading to Ottawa or arriving back home and government types from Ottawa flying north for meetings.

Wandering around the City of Iqaluit, it’s almost like the waves of Frobisher Bay keep cresting over land, with rolling rocky terrain heading off north and beyond, a land without trees. A steady hum of snowmobiles in the distance and tracks criss-crossing the city highlighted the main mode of transportation. Roads seemed somewhat arbitrary, pedestrians walked along the sides, scrambling for safety at times as taxis, trucks, cars and old vehicles, missing bumpers rushed about town.

After a few days in Iqaluit, I boarded a flight north to Qikiqtarjuaq to meet up with the guides and other team members. The terrain north of Iqaluit heading to Broughton Island is tundra – miles and miles of white that changes to mountains as you approach the town, the pillows of snow looking like perfect uninterrupted ski slopes. Walking into the airport was surreal, I compare it to a bustling town coffee shop – the meeting place with many Inuit preparing to fly out, two police officers, and many from town waiting for shipments, people and packages. It was festive! Waiting for the plane to unload, I met a friendly local teenage girl, soft-spoken and curious she asked me about my trip, she was headed to Iqaluit for a shooting competition.

A debrief with Parks Canada, packing and organizing and repacking the ski pulks, a night of good sleep and then we were off on a bone-chilling four-hour snowmobile ride… sans helmet. “You must be from the south,” quipped one of the Inuit men driving the snowmobile when I commented about helmets.  I smiled and thought about how different life is up here. It’s about living practically, following traditions and survival, not rules and regulations.  The Inuit dropped us off at the entrance of the Auyuittuq National Park.

The test!  The first night is the real enchilada.  They call it the “sleep system” – figuring out how much or little to wear so you will be toasty in your sleeping bag and not sweat or freeze. I wrapped myself in two layers of down (vest and light jacket) and two other layers (light fleece and one merino). It’s a balancing act that took one night to figure out. Clothes, good arctic sleeping bag, some hot shots to warm your hands, a hat on your head and I was pretty toasty after the cold first night which measured -27 C on the thermometer. I felt every degree.

Each morning around 7:30 am or so, we stumbled with our sleeping mats to the kitchen tent for coffee and hot chocolate. Down booties are the best invention and each morning, we wore these puffy marshmallows to stay warm and toasty. The four-season Sierra Designs kitchen tent almost pitched itself, and each night, we dug out a u-shape formation so that we had a snow table and a spot for our feet to hang, like sitting on a chair. After a slow breakfast, boiling water for drinking and a careful packing up, it became a ski day until almost dinner time.

It’s hard work because you cannot ski fast and sweat, you have to focus on staying dry even when you feel energized and want to move. Terrain as well makes the going tough with a mix of soft powdery sections, and then sheets of ice, or deeply rutted troughs of snow, carved bullet-proof by wind and cold. And the ski pulk is heavy the first few days – full of tasty food! I realized after two days that I didn’t need half the toiletries I brought – deodorant froze solid, wipes froze, skin cream froze, toothpaste became somewhat sludgy, sunscreen, well, at least not solid.

The food. Yes, I know as a long-time camper that anything tastes good when you are sleeping out, but Black Feather went above and beyond. Indian flavours with rice and shrimp, chili, burrito bowls, and pasta all filled hungry and cold bellies. Some dinners were dehydrated, others homemade. Breakfasts all prepared in front of us each morning, including our fav, the burrito egg wrap and one morning, French toast. Lunch was a potpourri of smoked salmon, meats, bars, nuts, tuna wraps, hummus and cheese. You learn quickly to eat. And keep eating. Snacks take away the chill, and you realize when you return that despite your constant effort to eat more calories, you have lost weight – your body trying to survive in a consistently cold environment.

It’s windy most of the time and there are no obstacles to slow down the howling across the tundra. The sunbeams warm stiff joints, but it’s deceptive, luring you into believing that it’s comfortable and sometimes we removed our hats and mitts. But once the sun sets or you ski behind a mountain or edge of the valley, the temperature plummets. Sitting in the kitchen tent is a highlight at the end of the day, we laughed, told stories, inhaled appetizers, and it’s cozy and almost a couple of degrees warmer than outside. Our rhythm was solid: arrive, set up tents, grab food and move to the kitchen tent, sit and chat, eat dinner and sleep. It’s repeated in the morning and then off we ski.

You feel the highs and low moments acutely out here. When the sun warms your body, and you notice the absence of noise, no planes, no snowmobiles or cars, no urban sound, no technology, it’s magical. But other times, stuffing your feet for the fifth morning in a row into hard frozen boots caked with blowing snow, you have brief moments when you wonder why you signed up and paid money to fly to the arctic.

Do you remember your physical geography class from high school? Glacial Erratics? Moraines? These features are all here. The terrain at the start of the Pass is quite different from the end, over 100 kilometres away near Pangnirtung. At the beginning of the trail, the valley is vast; the mountains have a rounder less jagged feel to them, a softness almost and we saw a set of fresh polar bear tracks one morning. Tiny emergency huts perched along the way consist of plywood benches, an emergency radio and an outhouse. The few snowmobiles we did see, looked like ants and we couldn’t hear them across the kilometre-wide valley floor during the first few days. Sometimes it’s easy to find a level spot to pitch the tent; other times, we pitched them behind boulders to avoid the wind so that we weren’t blown away.

The ascent to the summit is spectacular and shares a stunning view of Mount Asgard; two coned mountains joined by a saddle that looks like the tops were loped off. The valley narrowed, and with our skis and pulks, we made the steady grind up towards Summit Lake, where we cut through a moraine and popped out on this glacier-fed opening. It is a vast plateau where we camped behind a knoll of snow to protect us from the never-ending wind.

After the summit, the channel narrows, the peaks higher, more jagged and sharp – you feel surrounded and hemmed in by these towering monoliths. At this point, we donned our microspikes to travel the surface of the River as it winds and meanders past Mount Thor, famous for its 4100-foot vertical drop, the largest on earth. Plenty of moraines and glaciers soared above us, gnarly snow fingers hanging down and piles of rocky gravel randomly placed, remnants of glaciers that no longer exist. We traversed over the ice, pristine blue in places with bubbles and high ridges, and some with five-foot-deep crystal cracks. Melting ice for evening water consumption along the River gave us a taste of glacier water – I am hooked, it is delicious!

At night, it is either pure silence or wind. And if it’s windy, it’s a thundering steady roar and you wonder if the tent pegs will hold. Occasionally you hear rock fall off a mountain face and bounce its way down to the valley floor.

Andrew, a local Inuit, joined us for two nights and shared many stories about life in the Arctic. He is a father; he hunts caribou and elk, and his wife was recently elected to the town council. Andrew can fix anything on the fly, mainly because he told us, you have to up here. He shared that Pangnirtung and Qikiqtarjuaq won a Bowhead whale license for this year since only four are awarded each year because of their endangered status. The community picks a captain to kill the whale and the town shares in a traditional feast.

On the 11th day, the snowmobiles arrived hours late due to a snowstorm to pick us up at the end of the River, we huddled together for the 30-kilometre ride into Pangnirtung. A noisy shock to the senses arriving back in town with cars and TVs blaring in the hotel. It was a hard way to integrate back into urban life in a few short hours. 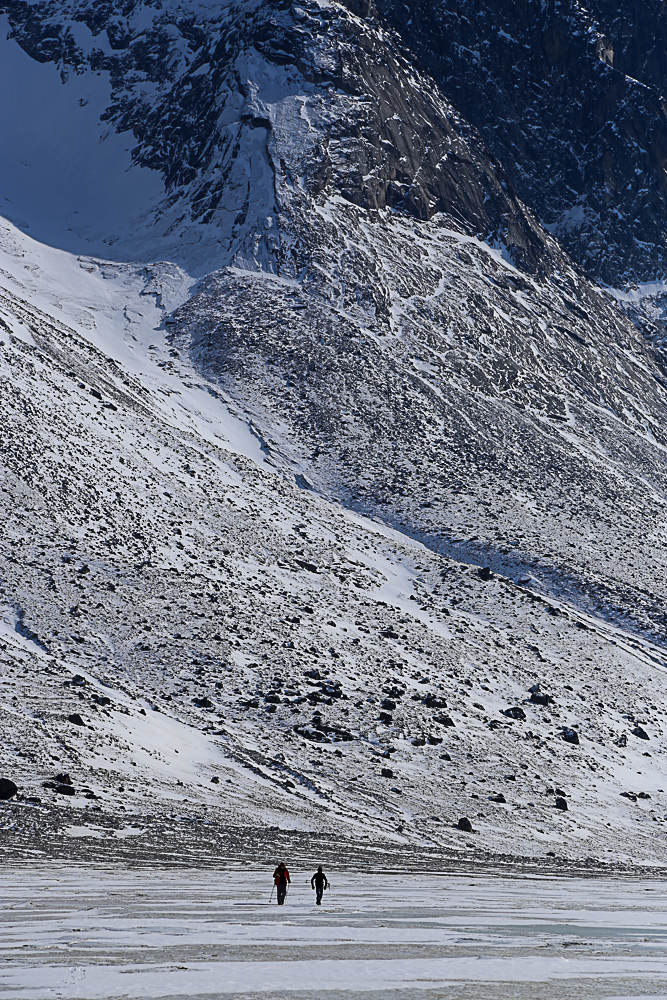 On the plane ride back to Ottawa, I realized how much I love the land of ice and snow. And despite the fiftieth birthday, the arctic felt like a place where time stopped.  I can’t wait to visit again!

What's your next adventure?

Nothing goes as planned 100% of the time. And that is when the magic happens.

Alone on the Wall

Fatal Storm: The Inside Story of the Tragic Sydney-Hobart Race 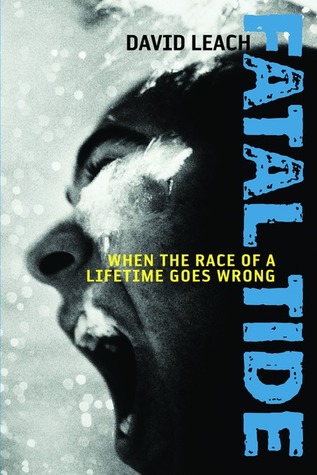 Fatal Tide: When the Race of a Lifetime Goes Wrong

The Stranger in the Woods: The Extraordinary Story of the Last True Hermit

Dream of leaving it all and running away to live and survive in the wilderness, searching for contentment? This is what one man did. Captured after br